Cameron Pratt On Why Montgomery County Has Fallen Behind Northern Virginia 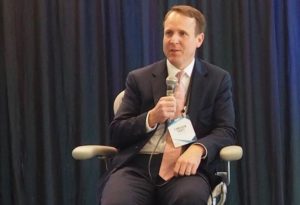 Foulger-Pratt is one of the most active developers in Montgomery County, with major projects including Park Potomac, East Village and Inventa Towers that are adding new apartments, office space and walkable retail to the county.

Cameron Pratt, who will speak July 16 on Bisnow's Future of Bethesda and Beyond event, has served as Foulger-Pratt's CEO since 2014. In May, he and three other Foulger-Pratt executives took over as managing partners and majority owners of the company.  While his company is making huge investments in Montgomery County, Pratt does have some concerns about the county's efforts to attract companies and improve its office market. In an interview with Bisnow this week, Pratt said Foulger-Pratt's leasing meetings on its Northern Virginia projects usually include many more large prospective tenants than those in Montgomery County. He attributed this disparity to Northern Virginia's superior infrastructure, with two airports, an ongoing extension of the Metro system and highways that feed directly into Downtown D.C.  "If Montgomery County is not willing to make investments in infrastructure, I don’t think they’ll be able to attract employers and compete with Northern Virginia," Pratt said. "They have made investment in transportation infrastructure and Montgomery County hasn’t." Pratt also discussed Montgomery County's housing moratorium that will expand to cover 12% of the county as of July 1, and he gave the latest updates on Foulger-Pratt's developments in the county. Read the full interview below. Bisnow: I want to start by talking about a few of the projects Foulger-Pratt is working on in Montgomery County. Earlier this month, you received preliminary approval for 630K SF of new mixed-use development at Park Potomac, bringing the total project to 2.3M SF. What does this approval mean for the project and what will this next phase look like? Pratt: The preliminary plan we got approved is really a minor adjustment of a plan that was approved many years ago. It’s really a reprogramming of Park Potomac. It’s just really being responsive to a shift in the market in Montgomery County over the years. Originally we had a hotel programmed for Park Potomac, that’s just not feasible in the market today, and we had more office approved. So it was really just shifting some office density to multifamily density. That was the primary change. It’s really a reprogramming of the master plan.