A Maryland-based company unveiled plans Wednesday for a more than $200 million development in East Village that would include apartments, office space and room for retail.

The Foulger-Pratt Companies project — for now called Block F Makers Quarter — would be 32 stories and take up an entire block bounded by 15th and 16th streets between F and G streets. It would include 405 apartments, 48,475 square feet of office space and 19,665 square feet for retail.

Developer Bryan Foulger told the design review committee of Civic San Diego, downtown’s planning agency, that its firm decided two years ago to branch out from the Washington, D.C., area because many people in the company had experience working in Southern California.

“We are extremely excited about everything that is happening, not only in San Diego but specifically East Village and Makers Quarter,” he told the committee. “We are enamored with this site.”

The committee had mostly favorable reactions to the project because of its high density but expressed reservations about the developer’s decision to not include low-income housing on site and pay fees instead.

Many recently favored projects by the board had both high density and low-income housing on site. For instance, two weeks ago officials praised a proposed 42-story apartment tower from Canada-based Bosa Development that includes units for low-income renters. 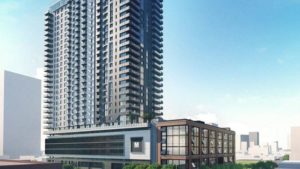 Design committee members indicated Wednesday they could live with the Foulger-Pratt project because of the substantial in-lieu fees required for not including low-income units on site — more than $3.4 million — that can be used to build more affordable housing downtown.

“You guys can build affordable housing more efficiently than the city can,” said Ted Shaw, chair of the committee. “(San Diego) Housing Commission is supposed to leverage dollars we collect and I know there is a balancing act. But, my preference is for it to be built on site because we get it faster.”

The Block F project is still some time away from a final approval, still needing to go through the full Civic San Diego board. It is expected to return to the design committee in two to three months based on recommendations.

The building is designed by Carrier Johnson + Culture. 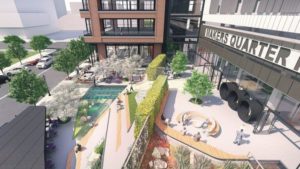