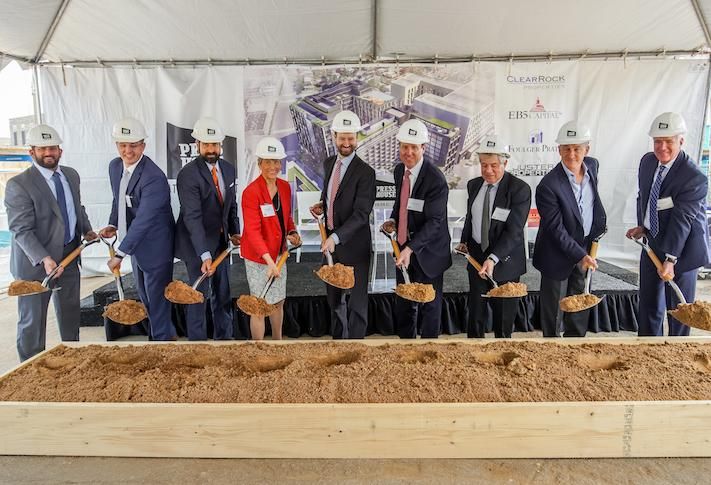 A $200M mixed-use development in NoMa is moving forward after an appeal delayed it for more than a year.

Foulger-Pratt Wednesday celebrated the groundbreaking of Press House at Union District, a three-building project at 301 and 331 N St. NE.

The developer has already demolished the structures on much of the 1.5-acre site, leaving the historic National Capital Press building on the corner of Third and N streets. It plans to rehabilitate the building and lease the first floor as retail and the second and third floors as office.

The apartments will include 31 affordable units, with 11 of them two-bedroom homes set aside for those making up to 50% of the area median income.

The development is also planned to include 85K SF of residential or hotel space in a later phase. It will feature 27K SF of retail space across the buildings. Courtesy of Foulger-Pratt A rendering of Foulger-Pratt's Press House at Union District The project sits about two blocks from the NoMa Metro station and less than a half-mile from Union Market. The neighborhood has become one of the fastest-growing areas in the city with a host of residential, hotel, office and retail development.

Foulger-Pratt's project is one of several in the area that have been delayed by a series of court appeals from a neighborhood opposition group. The project received Zoning Commission approval in December 2016 and had hoped to break ground by fall 2017. But a group called Union Market Neighbors appealed the project in January 2017, and the appeal was not decided until December.

The developer is partnering with Juster Properties and ClearRock Properties on the project. It also received a $34M preferred equity investment from EB5 Capital in a deal that closed last month. Torti Gallas + Partners is the architect of record and Rockwell Group is the interior designer.