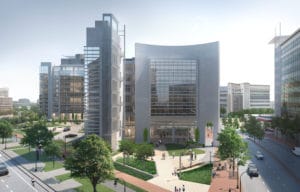 Foulger-Pratt plans to kick off its roughly $15 million renovation to Discovery Inc.'s Silver Spring headquarters this summer as the building's namesake tenant moves to its new home in New York.

Discovery (NASDAQ: DISCA) began moving out of One Discovery Place about two months ago, and its lease at the 550,000-square-foot office building expires at the end of March. With the company's planned departure, Foulger-Pratt and partner Cerberus Capital Management hope to reposition the building for multiple tenants. Managing Director Michael Abrams said the firm, with JLL as its real estate brokerage, has already received interest from a range of tenants for about half the building's office space.

"We have a pretty active roster of tenant prospects, and interestingly, many are in the health and education areas," Abrams said. Abrams hopes to announce the first of the building's new tenants within 60 days. The developers are seeking a per-square-foot rental rate in the upper $30s to lower $40s.

Abrams declined to identify any specific tenants. Much of the interest has come from companies now in other parts of Montgomery County or in the District, including some potential federal agency tenants.

Foulger-Pratt recently submitted site plans to refresh One Discovery Place, which will be rebranded as "Inventa." The name roughly translates to the Latin word for "discover," and was selected to pay homage to Discovery's impact on Silver Spring and the surrounding area. The developer considered a range of other brands for the property but settled on Inventa as a subtle reference to the building's soon-to-be-former occupant without serving as too much of a reminder that Discovery moved out.